We Love to Wreck Havoc.  (647) 503-5110)
Demolition Company Toronto we and our partners pride ourselves on unparalleled SERVICE and COMMITMENT to our clients; to establishing a respectful and quality life-long business relationship; to being one of the very best demolition companies in Toronto and in Southern Ontario.  In this business it's important for the client to feel confident, knowing the job will be done right and on time, with no financial surprises, and it's something our partners guarantee. This is the guiding philosophy of our Mississauga and Toronto contractor services for demolition. 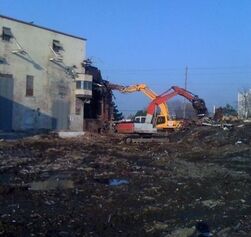 Projects we work on range from home demolition and water-proofing to light commercial and industrial facilities demolition and residential structure demolition. We use equipment that ranges from concrete crushers, wrecking hammers and an array of track and tire loaders.

As professional providers of Toronto demolition services, we and our contractor partners will always work to maintain an excellent working relationship with all Municipal, City, Region and Provincial departments to allow for expeditious service when getting required permissions and permits. We also assure our clients of the utmost attention to Eco-friendly issues, and our company maintains working relationships with environmental contractors in order to assist with any environmental cleanup that may become necessary. These relationships allow us to minimize to additional costs to our customer, and help to avoid schedule interruptions.
​We are proud of our record of jobs we and our associates have completed on time and within our job estimate.  You can review the services we provide including building demolition, commercial demolition like restaurants, stores and other buildings whether it's a complete demo or a partial demo as prep for a renovation or addition.  We handle or arrange all forms of environmental remediation associated with bad soil, asbestos removal and mold.

​What about safety?  For building demolition, safety is the number one priority.  Asbestos, gas pipes, electrical wires and hydro lines are all potential hazards of the job and you need to trust your demolition company has all of these elements covered before any work begins. We carry liability insurance, WSIB and adhere to Occupational Health and Safety Standards in Ontario

​​​Looking for superior interior demolition & excavation services?
​We want to hear from you.

OUR SERVICES AND EXPERTISE

For more information and help planning your demolition, renovation project, reach out to us.